What is the Endocannabinoid System?

History of the ECS

In 1988 during a government-funded study at St Louis University School of Medicine Scientists discovered that the mammalian brain has receptor sites that respond to compounds found in cannabis. These receptor sites turned out to be make up the most prominent neurotransmitter network in the human body.

Despite the legal status of cannabis making further research difficult it did not halt it. A second cannabinoid receptor (CB2) was identified throughout the immune system and peripheral nervous system by the National Institute of Mental Health in 1990.

After that, in 1992 at Hebrew University in Jerusalem, Scientists discovered the endocannabinoid anandamide and later, 2-AG. These groundbreaking studies paved the way for the mapping of the endocannabinoid system. A molecular signalling system that is involved in the regulation of many biological functions.

How does the endocannabinoid system work?

The endocannabinoid system is influential in managing a number of critical bodily functions such as appetite, mood, sleep  and inflammation,

The ECS is composed of three key components: 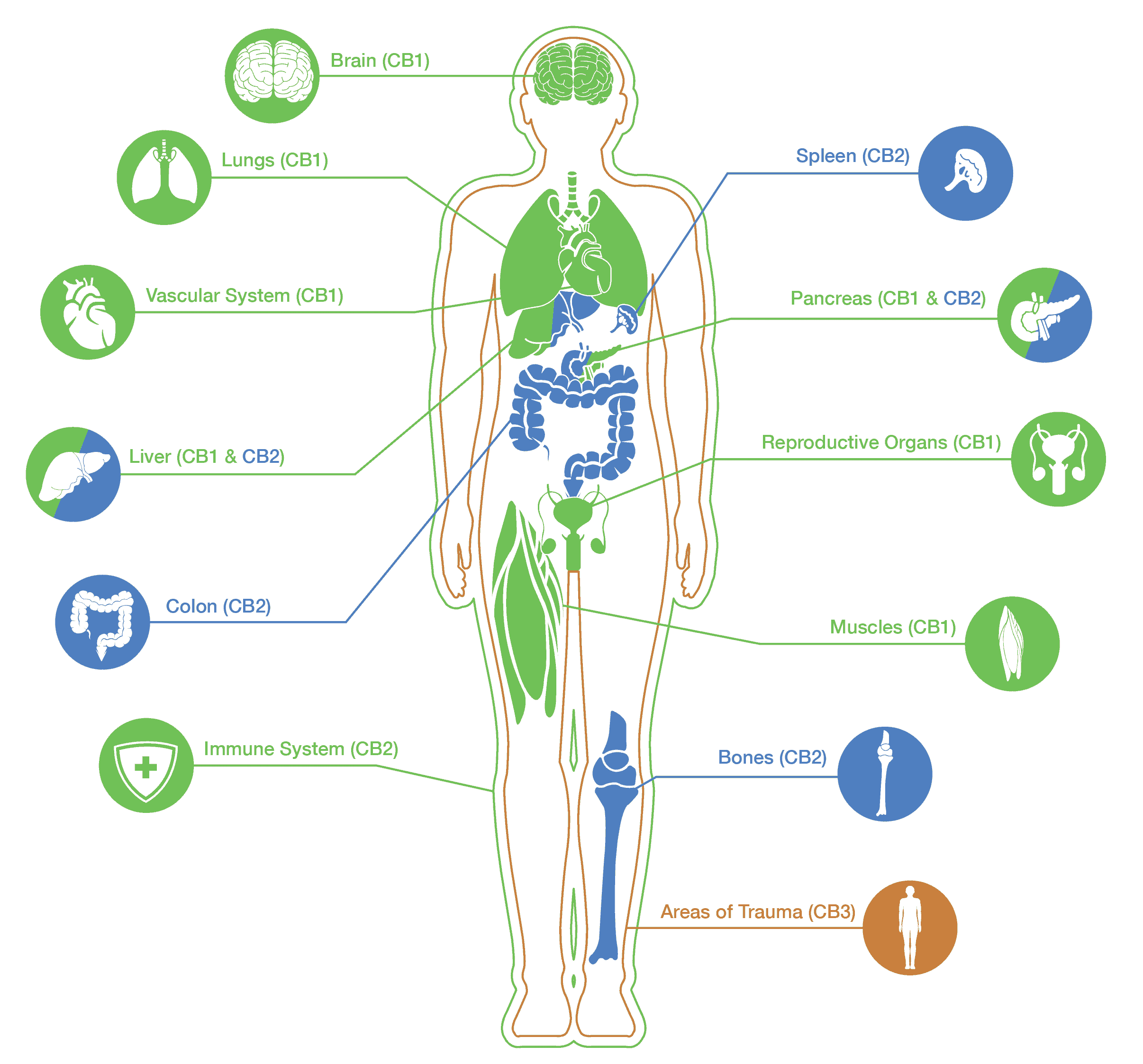 You will often hear the term homeostasis when discussing the ECS. Homeostasis is the concept that most biological systems are actively regulated to maintain a stable internal environment. ECS components form a crucial molecular system that the body uses to help maintain homeostasis despite fluctuations in the external environment.

Cannabinoid receptors [primarily CB1 and CB2] are located on the surface of cells all around the body. They measure the outside cell conditions then transmit information inside of the cell, implementing the appropriate cellular response.

Endocannabinoids such as anandamide and 2-arachidonoylglycerol (2-AG) are synthesised to interact with and stimulate cannabinoids receptors.

More from the Hemptations Blog

Because of its vital role in making sure that cells and systems remain in their physiological equilibrium, the ECS is tightly regulated. It gets deployed exactly when and where it’s needed. After the endocannabinoids perform their necessary function the metabolic enzymes such as fatty acid amide hydrolase (FAAH) immediately break them down.

Endocannabinoids such as anandamide and 2-arachidonoylglycerol (2-AG) are synthesised to interact with and stimulate cannabinoids receptors.

Because of its vital role in making sure that cells and systems remain in their physiological equilibrium, the ECS is tightly regulated. It gets deployed exactly when and where it’s needed. After the endocannabinoids perform their necessary function the metabolic enzymes such as fatty acid amide hydrolase (FAAH) immediately break them down.

CBD and the Endocannabinoid System

CBD’s action within the ECS is mainly indirect. It’s main role is enhancing the effects and levels of anandamide, the bodies’ default endocannabinoid. CBD acts as a FAAH inhibitor which slows the decomposition of anandamide. It also acts as an anandamide re-uptake inhibitor keeping it present at high levels within the ECS.

CBD is a weak antagonist of CB1 receptors which contrary to agonist substances like THC, it actually blocks the receptor. This may be associated with CBD’s analgesic properties. It is also worth mentioning that CBD is a biphasic compound. Therefore its threshold between agonist and antagonist is fluid and will depend on the dosage.

Finally CBD is a weak inverse agonist of the CBD2 receptor which means it weakens its efficiency. This very mechanism is thought to attribute to the anti-inflammatory properties of CBD. It is clear that the effects of CBD stem from both its ability to indirectly stimulate the ECS and its potential to influence other systems within the body.

Learn more in our CBD Blog

As CBD continues its meteoric rise, it’s no surprise to see it finally popping across [...]

How to take CBD Oil

CBD Dosage Guide for Beginners – How much should you take?

With so many CBD (Cannabidiol) products available today it can be difficult to know which [...]

Everyone is looking at how CBD can improve their standard of living but with so [...]

Ultimate CBD user guide – How to use CBD effectively

As Cannabidiol [CBD] continues to explode in popularity more and more people are availing of its many [...]

The resinous glands of the Cannabis plant contain extraordinary molecules that have been found to [...]